SUMMARY:
TowBoatUS Cape Coral, a sponsor for the 2nd Annual Offshore Rodeo & Reggae Party fishing tournament last month, announces that the event was a huge success. The tournament raised $70,000 in proceeds to benefit the Ronald McDonald House of Southwest Florida.

CAPE CORAL, FLORIDA (July 8, 2014) – TowBoatUS, a marine salvage company based in Cape Coral, announces the 2nd Annual Offshore Rodeo & Reggae Party fishing tournament was a huge success! TowBoatUS was a sponsor for the event, which took place June 7th, 2014 and benefited the Ronald McDonald House Charities of Southwest Florida. More than $70,000 in proceeds were raised from this year’s event. 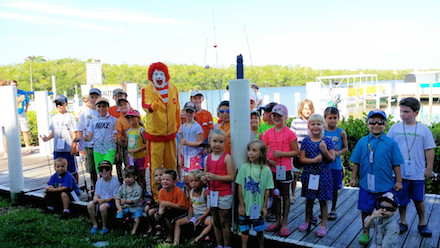 “We are thrilled to be a supporter for this event,” said Richard Paul of TowBoatUS Cape Coral. “It was a fun day for everyone involved, from the participants to the spectators. In addition, it feels good to be a part of something that is helping such a worthy cause.”

The Offshore Rodeo & Reggae Party brought out anglers of all ages, who spent the day reeling in a variety of species. Anglers wrangled in 10 different species for a chance to reel in big prizes; African Pompano, Cobia, Dolphin, *Grouper, Hogfish, Kingfish, Snapper, Triple Tail, Tuna and Wahoo. They then enjoyed their fresh catch for dinner, prepared compliments of the Lighthouse Waterfront Restaurant.

During the main event, a Kid’s Fishing Tournament was also held for ages 3-12, which took place at Port Sanibel Marina. Children had the opportunity to earn a “fishing license” by visiting a number of learning stations, then got to bait their line in hopes of a big catch! Afterwards, the kids were entertained by Ronald McDonald himself and enjoyed lunch compliments of McDonald’s.

The next Offshore Rodeo & Reggae Party is scheduled to be held in June of next year.

ABOUT TOWBOATUS CAPE CORAL:
From sponsoring fishing tournaments that benefit cancer cure research and wounded warrior anglers to salvaging sunken boats, co-owners Richard Paul and Jay McMillan of TowBoatUS Cape Coral believe in giving back to the people of Southwest Florida who’ve helped their business become a success. While their company mainly provides marine salvage and boat towing services, they provide peace of mind to stranded boaters off the coast of Lee County, FL and along the Caloosahatchee waterway. To enjoy the same peace of mind, sign up for an unlimited recreational boater’s membership at BoatUS.com/join/?wt10713I.