Cape Coral, Florida (April 22, 2014) – A stranded boater near LaBelle, Florida recently resulted in a 10-hour rescue mission. After an engine fail near the LaBelle bridge, a boater called TowBoatUS Cape Coral. Due to the series of events, the entire rescue took approximately 10 hours. However, TowBoatUS was able to get both the boat and captain to safety. 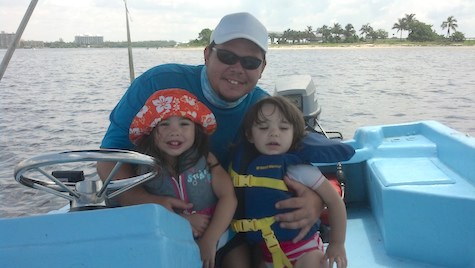 “After the call, I dispatched one of our Captains, Dan Medina at 2:30pm,” said co-owner of TowBoatUS Cape Coral, Richard Paul. “Dan was near the Cape Coral yacht club when I dispatched him, so it took him approximately 2hrs to arrive in Labelle. Upon arrival, Dan saw that the 28’ sailboat had been pushed ashore because of the wind.”

After un-grounding the sailboat, Captain Dan took the stranded boater in tow at approximately 5:30pm. He then towed the sailboat to the east side, Franklin Lock park, where the sailboater had arranged for a mobile mechanic to repair his engine the next morning. However, because Franklin lock closes at 7pm, TowBoatUS Cape Coral was not able to continue through to the towboat ports along the coast.

At 10:00pm Captain Richard Paul, owner of TowBoatUS Cape Coral, came to meet Captain Dan at the Franklin Lock boat ramp with a boat trailer. The towboat was then trailered to downtown Fort Myers and launched at that boat ramp to travel back to its port. Captain Dan finally arrived home from the rescue at 1:30am.

“This was definitely an out of the ordinary rescue,” said Captain Richard Paul. “We were happy that we were able to bring the captain and boat to safety, after a long night and an unfortunate series of events. But, the good news is that this particular boater had a BoatUS unlimited membership. So, the services did not cost him anything out of pocket, even though it was a 10-hour rescue!”