CAPE CORAL, FLORIDA (June 2, 2014) – TowBoatUS Cape Coral announces the 2nd Annual Redfish Poker Fishing Championship event, for which TowBoatUS was a sponsor, was a resounding success. The tournament took place on May 24th at Olde Fish House Marina in Matlacha, FL. The event raised close to $37,000, which went to benefit the Wounded Warrior Anglers organization. 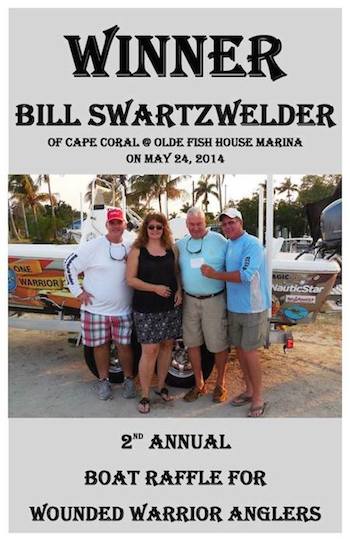 Each year the Redfish Poker Fishing Championship is held in honor of a wounded veteran who has passed the previous year. This year’s event was held in honor of Sgt. John R. Pestel, a local disabled veteran who lived in Bokeelia on Pine Island and served in the United States Air Force in Vietnam. John passed away this year on 2/04/2014.

“We were honored to be a sponsor for this event, and do our part to help such a worthwhile cause,” said TowBoatUS Cape Coral owner, Richard Paul. “The event had a great turnout, and was a fun day for everyone involved.”

This year’s tournament participants consisted of 11 kayakers and 23 boat teams. The largest catch was a 7.52 lb Redfish. The winning teams were as follows:

ABOUT TOWBOATUS CAPE CORAL:
From sponsoring fishing tournaments that benefit cancer cure research and Ronald McDonald House charities to salvaging sunken boats, co-owners Richard Paul and Jay McMillan of TowBoatUS Cape Coral believe in giving back to the people of Southwest Florida who’ve helped their business become a success. While their company mainly provides marine salvage and boat towing services, they provide peace of mind to stranded boaters off the coast of Lee County, FL and along the Caloosahatchee waterway. To enjoy the same peace of mind, sign up for an unlimited recreational boater’s membership at BoatUS.com/join/.