SUMMARY:
TowBoatUS Cape Coral is a sponsor for the David Lee Root Jr Memorial Fishing Tournament to be held on Saturday, July 19th, 2014 at D&D Bait and Tackle in Matlacha, FL. Proceeds benefit the Trauma Center at Lee Memorial Hospital. This event is currently the only fundraiser that benefits this cause.

MATLACHA, FLORIDA (July 16, 2014) TowBoatUS Cape Coral announces it is a sponsor for the David Lee Root Jr Memorial Fishing Tournament taking place on Saturday, July 19th, 2014. The event is a catch and release tournament, to be held from 7am-6pm at D&D Bait and Tackle in Matlacha, Florida. Proceeds from the tournament will go to benefit the trauma center at Lee Memorial Hospital. 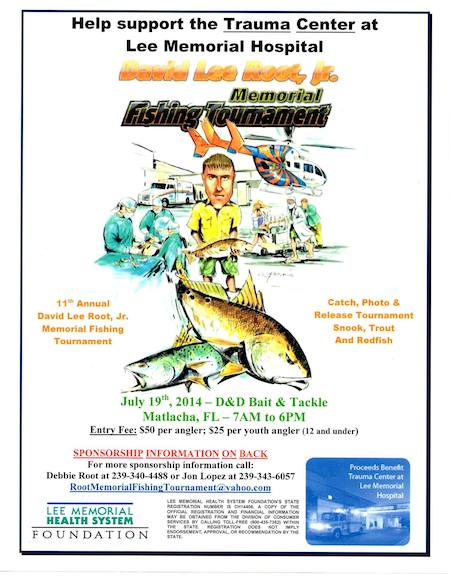 This event will be the 11th annual David Lee Root Jr. Memorial Fishing Tournament. Dave Root, owner of D&D Bait and Tackle, initially started the tournament after a car accident took his son’s life in 2001. Nine years ago, Root had another son whose life was saved after a car accident, due to the air services of the Trauma Center at Lee Memorial Hospital. Root then named the Trauma Center the benefactor of the tournament.

To date, the tournament has raised $126,935, and is currently the only fundraiser for the Trauma Center at Lee Memorial Hospital. Lee Memorial is currently using some of the donated funds to construct a room at the hospital for families of trauma victims.

“We are honored to be a sponsor for an event that benefits such a worthy cause,” said Richard Paul of TowBoatUS Cape Coral. “We make it a priority to participate in a number of tournaments that not only provide a fun activity for anglers and spectators, but that also bring our community together for a greater purpose.”

This year’s tournament will kick off with a captain’s meeting, including dinner, at 6 p.m. on Friday at D&D Bait and Tackle.

The fishing tournament will begin at 7am the next morning, in which contestants will be hooking snook, redfish, trout and a mystery fish. The anglers may fish from wherever they want, as long as they take a photograph of their catch and are back between 3:30 and 4 p.m. for the weigh-in. In past years, this event has attracted as many as 60 boats and 200-250 contestants.

Registration will remain open until the captain’s meeting Friday. It is $50 per angler and $25 per youth angler 12 years old and younger.

ABOUT TOWBOATUS CAPE CORAL:
The mission of TowBoatUS Cape Coral is to provide a premier on water service to the entire boating community. To that extent, they are committed to being involved as responsible corporate citizens in and out of the boating community which is why they sponsor so many tournaments. Events such as the Offshore Rodeo & Reggae Party, the Redfish Poker Tournament, and the Ryan McCleskey Memorial Redfish Challenge were fundraisers that benefited great causes while helping to fulfill TowBoatUS’s mission.